While much research has been dedicated to understanding the pathophysiology of Parkinson’s disease (PD), the neural circuit dynamics underlying the manifestation of motor signs remain to be determined. Current theories propose that the power and incidence of beta band (11-35 Hz) oscillations, synchronized throughout the basal ganglia thalamocortical (BGTC) circuit, are associated with the severity of motor signs. Although changes in bradykinesia and rigidity related to levodopa and deep brain stimulation (DBS) have been shown to correlate with the power of local field potential (LFP) oscillations in the subthalamic nucleus (STN), no study has deductively demonstrated their causal relationship. Clarifying whether this relationship is causal or epiphenomenon is critical to advance our understanding of PD pathophysiology.

The goal of this Catalyst Project is to characterize the relationship of rigidity and bradykinesia with beta band oscillations and their propagation dynamics in the BGTC circuit. We will leverage a new neural control approach capable of suppressing or amplifying frequency-specific neural oscillations in real-time using DBS leads. This technique, referred to as evoked-interference closed-loop DBS (eiDBS), is based on the concept that electrical stimulation with precise amplitude and timing can evoke neural responses that modulate spontaneous neural activity via constructive or destructive interference. We will characterize how controlled suppression or amplification of beta band activity in the internal segment of the globus pallidus (GPi) or the STN via eiDBS relates to the severity of rigidity and bradykinesia in PD patients. We will also test the hypothesis that changes in the propagation of beta band oscillations (information flow) across the GPi, STN, motor (MC), premotor (PMC), and dorsolateral prefrontal (DLPFC) cortices will be better correlated with rigidity and bradykinesia than the amplitude of beta band oscillations alone (Aims 1,2). Furthermore, we will characterize the spectral, temporal, and spatial dynamics of neural responses in the BGTC circuit evoked by stimulation in the GPi and STN. By combining the evoked response (ER) data with high-resolution imaging and computational modeling, we will delineate how activation of distinct neuronal pathways in the GPi and STN influences ER dynamics, critical not only to optimize eiDBS, but also to provide insights into the mechanism(s) of action of DBS (Aim 3). 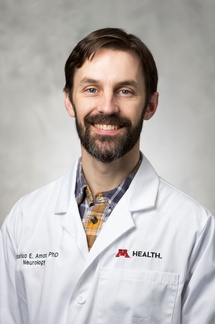